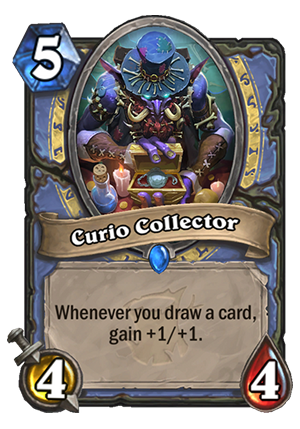 Curio Collector is a 5 Mana Cost Rare Mage Minion card from the The Witchwood set!

Experts worry that curios are a gateway to face-collecting.
Tweet

A deck that it could fit into is Minion Mage, with Book of Specters to be precise. Curio Collector + Book of Specters on Turn 7 is a 7/7 minion + 1 card advantage (since you use two cards and draw three in total). This is good, but the problem is that it’s bad if you don’t have it. The fact that if you don’t immediately combo it with a good draw, it starts as a 4/4 for 5 makes it almost unplayable. Such a minion will rarely survive unless you’re already far ahead.

Theoretically, for it to START getting value, you need to draw 2 cards – now it’s a 5 mana 6/6, which is above vanilla stats. But realistically, you wouldn’t put a 5 mana 6/6 into your deck. Maybe 7/7? 8/8? The point is that you need to play lots of card draw for this to be worth it, dropping it on Turn 5 is bad unless the board is empty AND you won’t always have a card draw to combo with him.

Oh yes, you COULD run it in the Aluneth deck, but that’s not a good idea, to be honest. First of all, Aluneth decks usually don’t run lots of card draw besides it (so you won’t draw a bunch of card draw after you’ve already played Aluneth) AND you want to empty your hand as quickly as possible after playing Aluneth, and 5 mana minion is not always the best one to do it.

Overall, it’s cool that they’re trying to push new stuff, but this one doesn’t look promising.