The new ranked system has already launched (or will launch very soon, depending on your time zone). Since it’s working a bit differently than the old one, it’s only natural that some of the players might find it hard to understand at the beginning.

In this post, we’ll go over what has changed and how things will work now. If you have any further questions, be sure to ask them in the comment section!

Since the changes went through, we have 50 ranks instead of 25. Ranks will be divided into five leagues (which you might be familiar with from other games) – Bronze, Silver, Gold, Platinum and Diamond. After all of that, players will be promoted to Legend (which works exactly the way it did before).

Each of the ranks will only have 3 stars, which means that you need to get a total of 150 stars to get all the way from Bronze 10 to Legend. There’s a rank floor every 5 ranks (at 10 and 5 in every league) – when you hit it, you can’t fall back during that season. 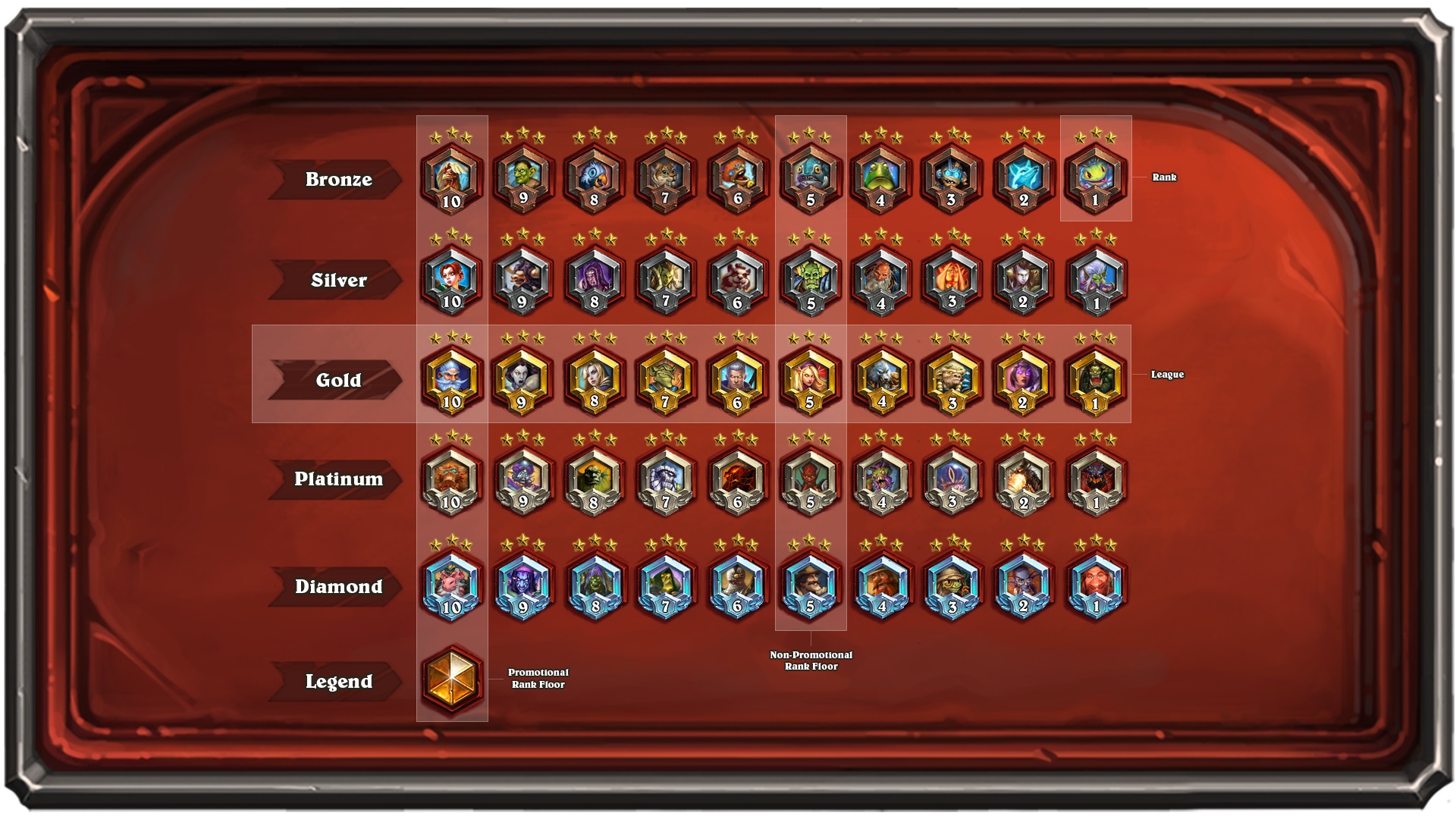 Each player will be reset all the way back to Bronze 10 when the season is over. It means that he will have to grind his way back to where he was previously. Luckily, players will not have to do it a single star at the time. Whenever you reset, you get a bonus star multiplier based on the rank you ended up during the previous season. The maximum star multiplier you can get is 11x (so 10 bonus stars for every win) for hitting “high” Legend (but we don’t exactly know what “high Legend” is). A more realistic one, however, is 10x multiplier for simply hitting Legend. Star multiplier only counts for the wins – e.g. if you have a 5x star multiplier, you get 5 stars for a win, but lose only 1 star for a defeat. Star multipliers are also affected by win streaks – e.g. if you’re on a win streak, you will get 10 stars instead of 5. Win streaks only last until Diamond 5, from there until Legend you need to climb without streaks.

Every time you reach a rank floor (and thus get closer to were you were before reset), your star bonus is reduced by one. E.g. if you were getting 10 extra stars and you hit a floor, you will now get 9 extra stars from now on. It means that players will have easy time getting back to their actual rank, but won’t be able to climb all the way to Legend with bonus stars if they finished lower previous season.

Additionally, new players have their own league (the same way they had R50-R26 in the old system), which has 40 ranks in total.

Another important change is that all of the matchmaking will be MMR-based now. In the old system, you got matched with people who are as close to your rank as possible – so if you were at R5, you would play against other people who are at R5 (or one rank lower/higher if no one from your rank has queued at the same time). But in reality, that person might have a completely different MMR than you do. In the old system, MMR didn’t matter until you hit Legend.

In the new system, if you’re playing at let’s say Gold 5, you won’t face other Gold 5 players, but rather other players who have similar MMR. They will likely be at a similar rank, but not always. It’s a big deal, because it will make the pre-Legend matchmaking much more balanced. It will matter most early in the season after reset. Even though Legend players will go all the way back to Bronze 10, they won’t face newbies – they will still play against themselves (based on MMR).

There are also some changes to the reward system. We now have two kinds of rewards – end of season rewards and first-time rewards. The latter will be one-time bonuses for hitting a certain rank and will give you either Classic Packs or Classic cards (starting with Rares, then Epics, and finally Legendary for reaching Legend for the first time). It will be a nice way to speed up the progress and feel rewarded for new players. But of course, those will no longer apply after you already hit a certain rank and then do it again next season.

However, the end of season rewards also got better, and it will now make sense to work harder to get to higher ranks. Below is the full list of new rewards:

Rewards are cumulative. So if you hit Legend in a given season, ignoring any one-time rewards, you will get five packs from the latest expansion, seven Rare cards from Standard sets and one Epic card from Standard sets. The biggest improvement is obviously getting packs – up to 5 extra packs per month. And the important part is that they’re from the latest expansion, which usually has the highest value. And with no duplicate rule applying to all rarities, packs have also increased in value ever so slightly.

Yes, Legend Card Back is still there! If you get to the Legend first time, you earn it just like you did previously.