Update: Darkmoon Faire has been revealed, so the pre-launch party is starting with Reddit Deck Contest! You can find all the info below!

Blizzard is going pretty big with the pre-launch party for the upcoming expansion. They’re giving out hundreds of Mega Bundles and thousands of Twitch subs.

After the entire set is revealed (there’s a final reveal stream on November 11), there will be a deck building contest on reddit – 20 most upvoted decks will get Mega Bundle codes, but that’s not all – content creators (streamers, YouTubers) will then test the most popular decks before expansion’s launch. So you can have a real saying in what they will play. The decks (including those who streamers will just test by themselves) are required to have AT LEAST 10 Madness at the Darkmoon Faire card, which means that it should be more interesting than “let’s take an old deck, add in 2 new cards and call it a day”.

Then, between November 12 and 15, content creators will hold multiple giveaways (including a huge reddit giveaway for 100 Mega Bundles) – you will be also able to win subs to their channel if you’re interested in that.

For more details and exact time periods for giveaways, Twitch Drops etc., refer to the official announcement below.

To bolster our usual Theorycrafting Livestreams and Pre-Release Weekend, we’re introducing something completely new: A Pre-Launch Party! To sum it up, we’ll be doing Mega Bundle code giveaways, Twitch Drops, sub giftings, and more in the lead up to the launch of Madness at the Darkmoon Faire and Duels: Season One!

Our goal with the Pre-Launch Party is to make this period feel a bit more interactive for everyone while celebrating our incredible community and the launch of the new expansion. Check out the calendar to see what’s happening around the community and what we’ve got in store for you! 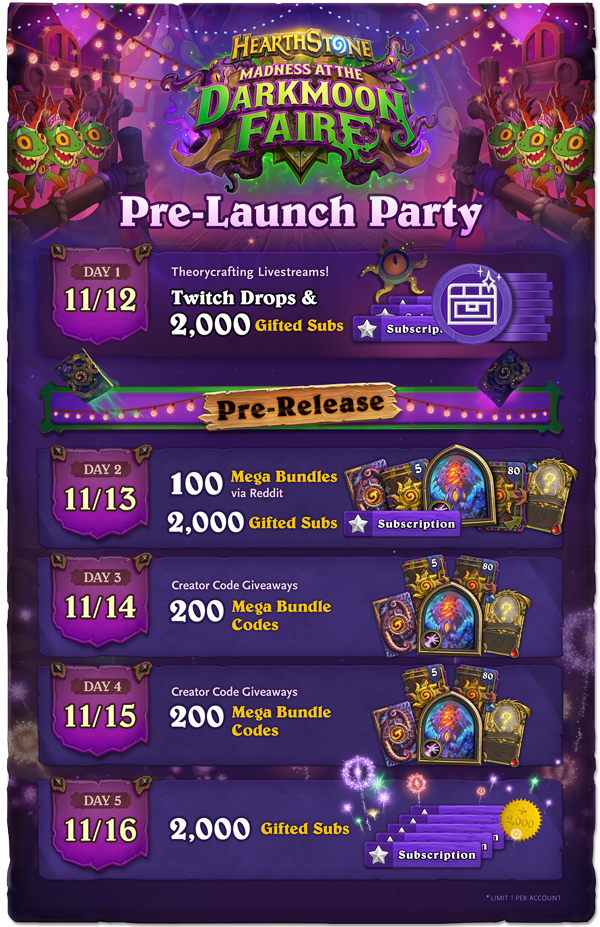 Join Kripp, Community Manager Chris Sierra, and Game Designer John McIntyre on November 11 at 10:00 a.m. PT as they reveal the final Madness at the Darkmoon Faire cards on stream at Twitch.tv/PlayHearthstone and Youtube.com/Hearthstone!

After the stream, head over to the Hearthstone Subreddit to participate in a community deck building contest. The most upvoted decks submitted will be played by creators during Theorycrafting Livestreams! Here’s how it works:

What’s more, if your deck is one of the top 20 most upvoted, you’ll get a Madness at the Darkmoon Faire Mega Bundle code! We’ve also given the Hearthstone Subreddit 100 additional Mega Bundle codes for a separate giveaway they’ll be hosting on November 13!

On November 12, Hearthstone creators will showcase the Madness at the Darkmoon Faire set 5 days before launch on their personal channels. This time around, things will be a little bit different. Participating creators will be required to have at least 10 cards from the new Madness at the Darkmoon Faire expansion included in each deck, and duplicate cards are allowed (such as x2 of 5 cards). 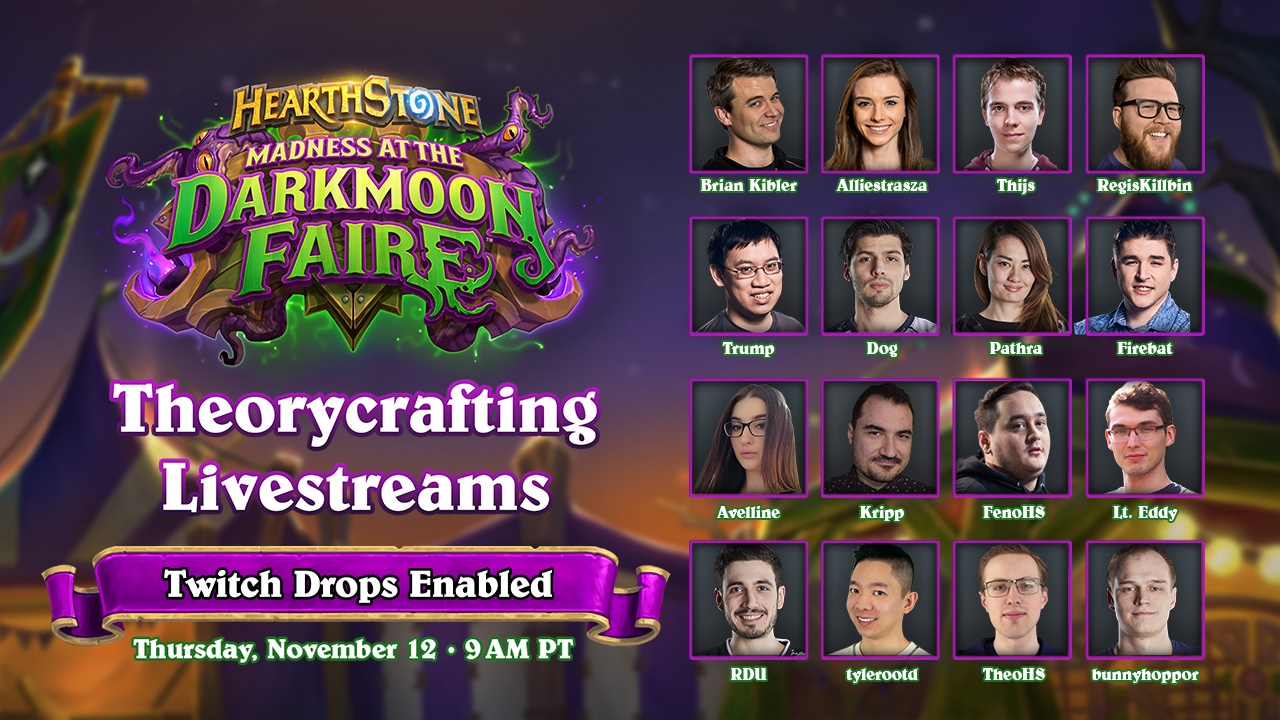 We’ve also leveled up Theorycrafting with Twitch Drops! Watch any of the Hearthstone creators listed above on November 12 between 9:00 a.m. PT and 12:00 p.m. PT for 2 hours to earn 1 Madness at the Darkmoon Faire card pack! Watch 2 hours of any Hearthstone stream on Twitch between 12:00 p.m. PT and 6:00 p.m. PT for another one! Card packs will be locked until the expansion launches on November 17. You must link your Twitch and Battle.net accounts before you can receive a drop.

Before you can receive rewards, you’ll need to link your Twitch.tv and Battle.net accounts. Here’s how:

The official rules for Theorycrafting Twitch Drops can be found here.

We’re planning to publish more details on Pre-Release Weekend in early November, but we’re ready to share that Pre-Release will run from November 13-15! Over the course of Pre-Release Weekend, we’ll be giving away hundreds of Mega Bundle codes and gifting thousands of Twitch subs on creator channels!

We hope you’re as excited about the Pre-Launch Party as we are! Be sure to check out our official announcement of Madness at the Darkmoon Faire, available for pre-purchase now in-game and from Battle.net Shop!