We’ve got some important changes coming when it comes to Masters Qualifier. Given that the current competitive system is still fresh, it’s been tinkered with ever since its inception. While it’s not a complete overhaul of the system, it’s going to be heavily modified. Here’s a

The changes will go live October 1. You can read more about them in the official blog post below:

We’ve surveyed a number of Masters Qualifier players to get a better understanding of pain points in the current structure of the program. Today, we’re ready to share the changes we’ll be making to improve Masters Qualifiers and Masters Tour events. The adjustments outlined here will be implemented on October 1 and are explained in more detail below.

When we announced Specialist at the beginning of the year, we listened carefully to the feedback of the participating players. We appreciate the response from the community and have decided to make the following changes. Starting October 3, Masters Qualifiers will use the Conquest, best-of-three, 3 decks with a ban format. This is to ensure that the format is simple for new players entering the competitive system.

Based on the feedback from Masters Tour players, we will be changing the format for the Masters Tour to Conquest, best-of-five, 4 decks with a ban format, starting with Masters Tour Bucharest. Given that this format change increases the average time it takes to complete a round, we are scaling back the number of Swiss rounds each Masters Tour has from the current 12 down to 9. To further reduce the length of days, we will be going to a straight single-elimination bracket for the Top 8 of the tournament. We feel that the additional games per match adequately offset the reduction in total matches played.

To free up the aforementioned invites we’re allocating for Ladder finishes, we will be going back to only awarding the first-place competitor in Masters Qualifiers with an invite to its corresponding Masters Tour event, instead of both the winner and runner up. We also need to adjust the threshold for the number of Top 8 finishes in each qualifying period. If a player makes Top 8 at least 6 times in a qualifying season currently, they will earn an invite. We’re bumping this number down to 5.

We’ll also be expanding Masters Qualifiers to a maximum capacity of 512 players. We are making this change so that we won’t have to turn anyone away from a Masters Qualifier that they’d like to participate in, which we have experienced in European Qualifiers specifically.

With ladder playing a larger role in qualifying paths for Masters Tours, we wanted to take inventory of all paths into a Masters Tour. Our goal is to offer approximately 350 invites into each event. Here is the new breakdown for how Masters Tour Invitations will be distributed: 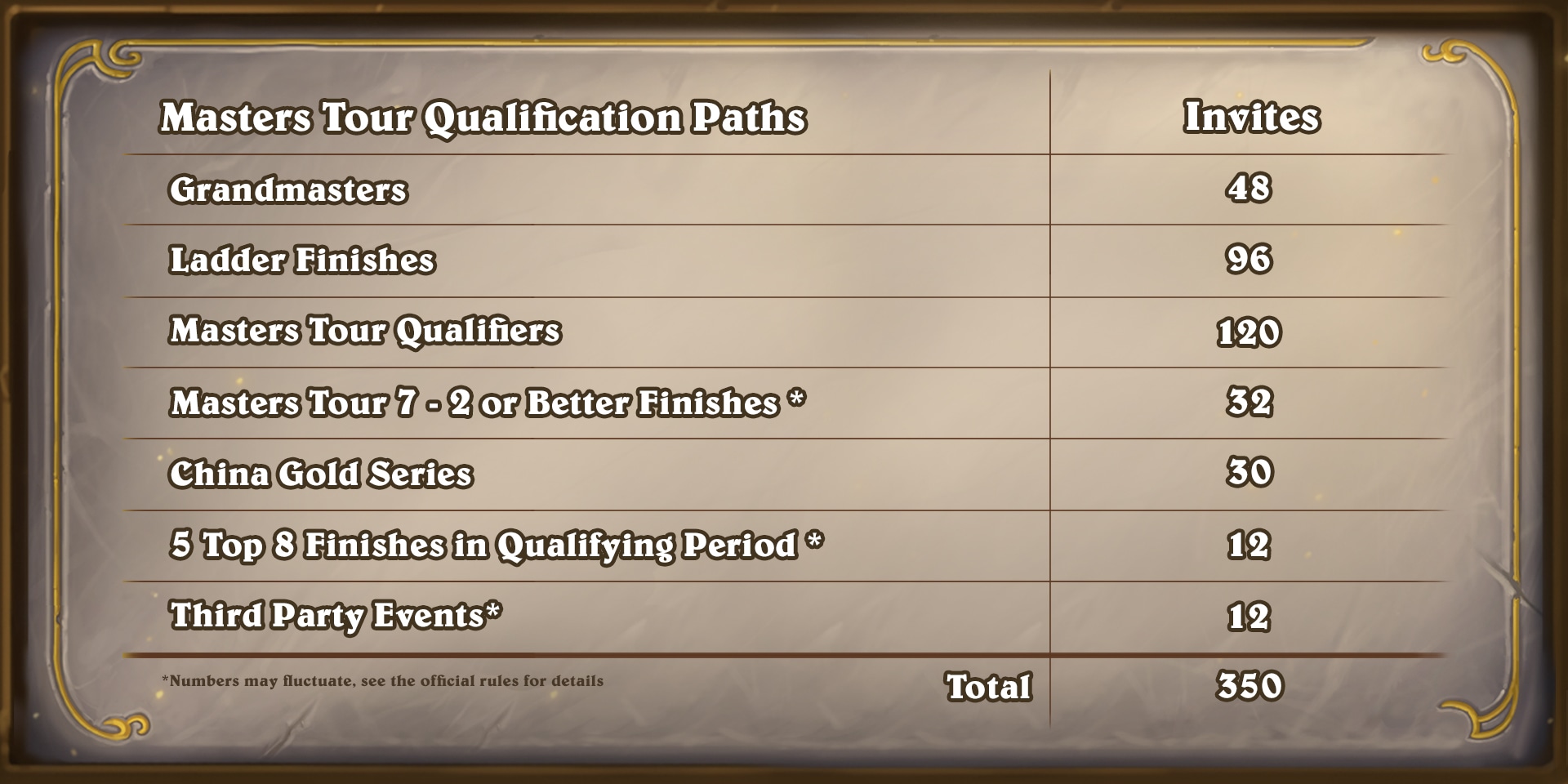 Finally, since we’ve increased the number of participants in each tournament, we wanted to rework the tournament pack prizing. You can see the new pack prizing in the chart below. Overall this represents an addition in pack prizes compared to the past.

This post is only a summary of the changes, the official rules spell out the exact competition details. In addition to the above changes, our tournament platform partner Battlefy is excited to share additional features they have been working on. We will be announcing the location and qualification timeline of the next Masters Tour in the coming days, so keep it tuned to playhearthstone.com/esports!