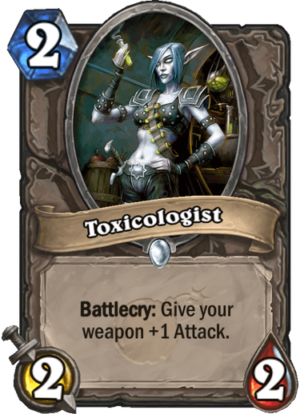 Toxicologist is a 2 Mana Cost Common Neutral Minion card from the The Boomsday Project set!

Battlecry: Give your weapon +1 Attack.

Double-majoring in culinary sciences was definitely a mistake.
Tweet

Well, right now I see a single deck that would want to play this card – Kingsbane Rogue. The deck is depserately looking for more ways to buff the weapon, since lots of them have rotated out. It has got a Cutthroat Buccaneer last expansion, but it wasn’t enough. This card is better, to be honest – while it has weaker stats, Kingsbane cares more about the buff than the minion’s stats. And this adds the same amount of Attack, for 1 mana less and on a Battlecry instead of Deathrattle.

Long story short, it will definitely see play in Kingsbane Rogue, but that’s probably it. Other than that, we don’t really have other decks that would want to play 2 mana 2/2 that buffs weapon.

Card rating: 8/10 in Kingsbane Rogue, but the deck will still most likely be bad in Standard