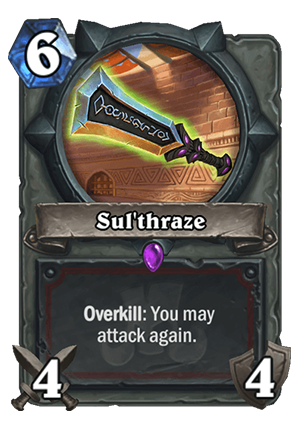 Overkill: You may attack again.

Overkill is a new mechanic. It means that if you deal excess damage, the card does something extra. E.g. in this case it’s the ability to attack again, which means that if you use it to clear a minion that has 0-3 health (assuming it stays at 4 attack and you don’t buff it), you will be able to attack again. I think that this card might be underestimated.

But let’s start with some comparisons. We already had a slightly similar card – Fool's Bane. It had 3 attack, 4 durability, and you could swing it as many times as you wanted. IT was sometimes teched into Control Warrior, but pretty rarely and it wasn’t a great card overall. But the biggest issue with Fool’s Bane is that you could never go face with it. That’s not a problem with Sul’thraze.

Warrior already has a weapon for clearing Midrange boards – Supercollider, which was one of the best Warrior cards in the recent expansions. And while it’s true that a Control deck probably wouldn’t drop it for Sul’thraze, it again shares a similar theme with Fool’s Bane. While it CAN attack face, it’s not very efficient, since it only deals 1 damage per turn.

This card should be compared to something else –Arcanite Reaper, a card that was played in Aggro and Tempo Warrior decks in the past. Arcanite Reaper is 5/2 weapon, while this is 4/4 – a 4/4 is obviously better, but it also costs 1 more mana. However, I feel like the extra effect makes it significantly better than Reaper – the fact that you can use it as a really good board control tool while still pulling face damage on top of that is great. With Arcanite Reaper, hitting smaller minions felt really bad, because you’ve lost so much damage. In this case, you can do both – clear a minion and still hit face for 4 (or more if you buff it). The 4 durability is also amazing – assuming you attack face every turn, that’s 16 damage over 4 turns. Yes, it takes long to get all of that damage, but it’s A LOT. One Upgrade! pushes it to 5/5, which is 25 damage over 5 turns. That’s almost enough to kill the opponent with this weapon alone, and it’s A LOT of burn.

I really don’t think that it will be played in Control Warrior over other options like Blood Razor or Supercollider. And it won’t fit into Odd Warrior anyway. But if some kind of Midrange/Tempo Warrior pops out, I could totally see it being played. Maybe the deck might even run Hench-Clan Thug for a good measure, if it would be weapon-heavy (I mean, this card can immediately buff it to 5/5 or even 6/6 quite easily).

Card rating: 8/10, but mostly playable in Midrange/Tempo style of Warrior 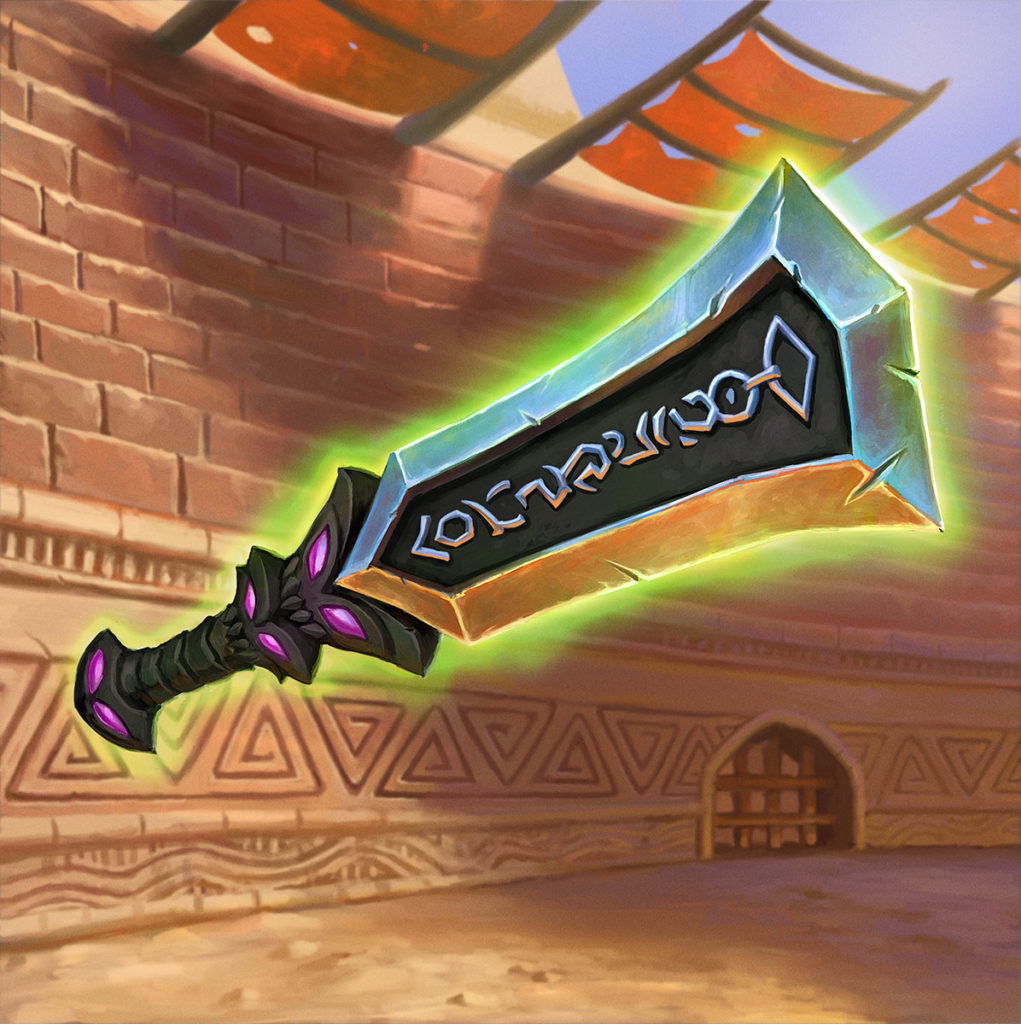