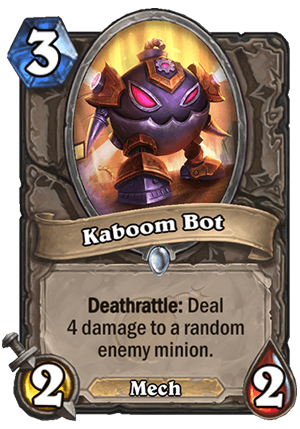 It’s a bit like a bigger, Mech version of Volatile Elemental, a card that has seen zero play. And this will also see no play, most likely. I know that it’s Neutral, but just compare it to Spider Bomb… while Spider Bomb has insane late game scaling, this will stop killing minions with 5 or more health, which is basically most of the mid/late game minions. And it can’t even Magnetize onto something to trigger the effect immediately.

A pretty bad card. Would be really good if it was a Battlecry, but not really as a Deathrattle. Hunter is basically the only Mech deck that has Deathrattle synergies like that, and Hunter has a better option anyway.