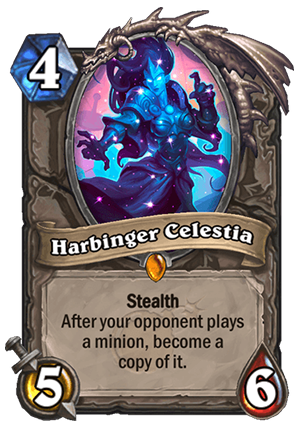 Harbinger Celestia is a 4 Mana Cost Legendary Neutral Minion card from the The Boomsday Project set!

Stealth After your opponent plays a minion, become a copy of it.

She wanders realities, taking on many forms. One was a unicorn princess.
Tweet

This is a weird one, not sure what to think about it. While I applaud Team 5 for a cool design, it seems to be incredibly weak. Or rather, incredibly meta-dependent. If everyone would be playing either no-minion decks or decks with only big minions, then it would be amazing. But that won’t happen.

So, for 4 mana you get a 5/6 with Stealth. That’s massive, but don’t be too happy yet, because you most likely won’t be able to use it as a 5/6. This is like a Mirror Entity, which costs 1 mana more, you can’t cheat out with Kirin Tor Mage and is not really a Secret, because your opponent knows what it is. Basically, if your opponent has any small minion in your hand, you just spent 4 mana to get it. If your opponent drops some 1-drop, or 2-drop, then you get a copy of it and that’s it.

The thing is, even most of the slow decks actually run small minions. Control Priest would be able to counter it with let’s say Wild Pyromancer, Big Spell Mage with Raven Familiar, Even Warlock with… a bunch of stuff, including Doomsayer if you have anything else on the board.

It only punishes your opponent if a) they don’t have any minions at all (rarely happens) and b) they have only big minions and can’t deal with your copy immediately. But those two scenarios don’t come up that often. In most of the matchups, and throughout most of the matches this card will be weak. Completely dead against most of the Aggro decks, unless you enjoy playing 4 mana 1/2’s.

A very specific tech card, might see play in some weird meta a while for now, but I don’t see it being usable in Boomsday. At all. Still, I give Team 5 A for the design, I wouldn’t come up with that one.

Card rating: 2/10, but it technically MIGHT be strong in certain specific matchups, so if they dominate the meta… yeah.