Last week we’ve posted about 10 card nerfs that will be reverted before the upcoming Standard rotation. Among those, Iksar has teased one Year of the Dragon card (which won’t be rotating out to Wild) that will have its nerf reverted. Now we know which card it is!

Sludge Slurper will be back to 2/1 stats (up from 1/1). It was nerfed ~2 months ago alongside a bunch of Galakrond Shaman cards. However, the nerfs turned out to be an overkill, nearly eliminating Shaman from the meta. While the card wasn’t even a part of Galakrond package, it got hit “just in case” simply because it was a generic, strong, early game minion. While I don’t believe that reverting this nerf will bring Shaman back to the meta immediately, it will give the class a stronger foundations going into next expansion.

The card will get buffed back to its regular state in “next update”. 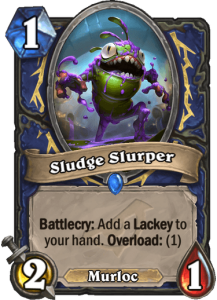 In our next update we’ll be reverting nerfs to a few select cards, these will primarily be cards rotating into Wild. However, included in this update will be Sludge Slurper, who will revert back to 2 Attack / 1 Health.