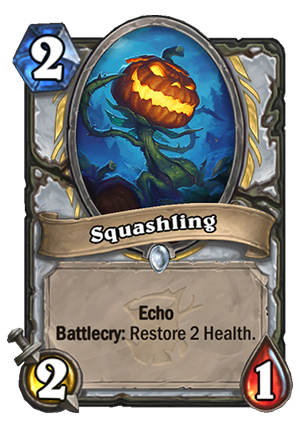 Squashling is a 2 Mana Cost Common Priest Minion card from the The Witchwood set!

It’s like a 2/1 body with a Priest Hero Power attached… which you can play multiple times per turn. Or well, to keep it simple, an Echo version of Voodoo Doctor. To be honest, Voodoo Doctor isn’t a terrible card by itself – its main problem is the late game scaling, which it just doesn’t have. Early you don’t need healing, and later the 2/1 that heals you for 2 is just bad. This can scale quite well into the late game, as you can heal up to 10 (spread between up to 5 targets) with 5x 2/1 on the board. Depending on the situation, it might be really good.

I actually see this more as a mid/late game card than something you’d ever want to drop before Turn 6. Playing it once or twice is pretty bad, and I’d do it only if I could combo it with something.

Just like any other Echo card, flexibility is what makes it okay. But just like any other Echo card, I feel like they went on the “fair” side with this mechanic – there is no really overpowered Echo card, and this one seems to follow a similar pattern. Might see play in some slower Priest decks, maybe Heal Priest built around healing stuff will eventually be a thing (probably not now, but depending on what they release during the next expansion or two).