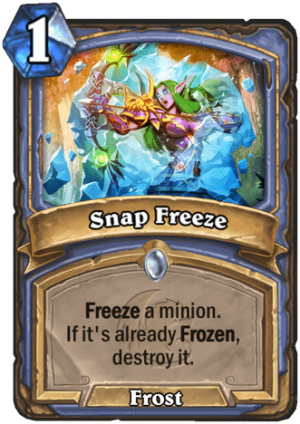 Freeze a minion. If it's already Frozen, destroy it.

Shatter power creep! But to be honest, even if you power creep it, Shatter was one of the worst cards in the entire game, so even an upgraded version still looks bad. This is what Shatter should have been in the first place, to be honest.

But even after a lift, the card still looks unplayable. We’ve already established that destroying a frozen minion for 2 mana is terrible. How about Freezing it for 2 mana? Well, Freezing Potion was a card and it has never seen play (outside of the random effects), even though it costs 0. Not to mention that Ice Lance was also a thing (I wanted to say “is”, then I’ve remembered that it was HoF’d a year ago), and it has only seen play for its burst potential.

The only good thing that can be said about it is that when you get it out of a random effect, it’s not a completely dead card, like Shatter often was. You can still use it as an overpriced Freezing Potion if you have no way to combo it. Bad card, but not as mind-blowingly bad as Shatter.