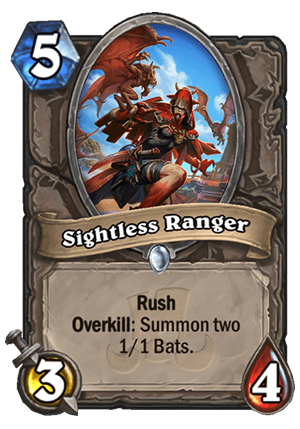 In general, Overkill works better on cards with Rush, since you can wait until you have the right target and trigger them immediately. But having the right target might be quite difficult in this case – you need a 1 or 2 health minion, and Turn 5+ is often too late for that. Yes, your opponent might drop one eventually, but even triggering it once is not very good. I mean, a 3/4 minion with Rush that summons 2x 1/1 AS A BATTLECRY would be okay, but maybe not even constructed playable (we have a 4 mana 2/4 with 2x 1/1 that’s not Constructed playable, you pay 1 mana for +1 Attack and Rush on the main body, I think that would be fair).

That’s the thing about this card – not only Overkill effect is moderately difficult to trigger (because you can’t get it on 3 health minions, which are very popular), but it’s honestly not even that strong. You would need to trigger it twice in order for it to actually be a good card, and that’s way too much. If you don’t trigger it at all, playing 5 mana 3/4 with Rush is terrible – I wouldn’t play a 3/4 Rush even at 4 mana.