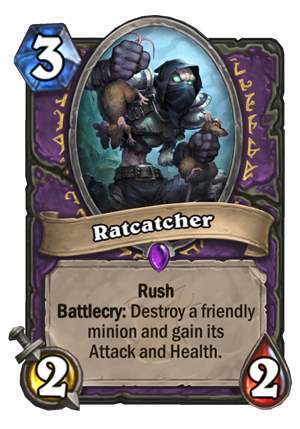 Ratcatcher is a 3 Mana Cost Epic Warlock Minion card from the The Witchwood set!

Rush Battlecry: Destroy a friendly minion and gain its attack and Health.

He's on the hunt for Togwaggle's missing rat.
Tweet

Interesting card. It’s a bit like Void Terror with worse stats and Rush. Void Terror has seen play back in the day, when Power Overwhelming was a thing, and this would honestly be even better in a Zoo deck like that (so it might see play in the Wild). What makes it better than Void Terror is Rush. You could make a big Void Terror, but you still had to wait a turn before you can attack with it.

Thanks to this card, you can “double-dip” on the stats in a single turn. For example, if you have a 5/5 minion, you can run it into some 4/4, then Ratcatcher it, then run it into a 7/7 minion to kill it off. This is just an example, but you can simply “re-use” attack of a minion that has already attacked, which is a high tempo play.

There are two decks that might want to run it. First is Zoo Warlock, but honestly, it would work best with temporary buffs like PO. Dire Wolf Alpha and such are also solid, but they don’t give you that much.

Other deck might be Cube Warlock. It might be a good way to pop the Cube in the late game – you often don’t need healing, especially in a slower matchup, and on Turn 8 you can Cube something, pop it and still have a 6/8 Rush minion.

I’m not absolutely sure whether it will make a cut, but it has some potential in the right deck.