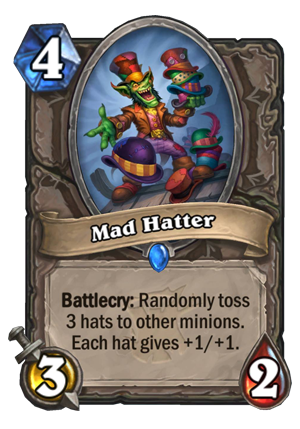 Mad Hatter is a 4 Mana Cost Rare Neutral Minion card from the The Witchwood set!

Battlecry: Randomly toss 3 hats to other minions. Each hat gives +1/+1.

He's entirely bonkers. All the best goblins are.
Tweet

In the best case scenario, this card is good. If your opponent has no minions, it’s a 3/2 that gives you +3/+3 in total – that would be playable. However, it’s only the best case scenario. Even if a single buff lands on your opponent’s minion, it’s already bad. You play an understatted minion and get only +1/+1 more than your opponent – now it’s comparable to a 4 mana Shattered Sun Cleric. Of course, it heavily depends on which minions it lands specifically, but that would already be bad. Then, it can also completely backfire – if the RNG hates you and you somehow give your opponent +2/+2 or even +3/+3, then you might have lost yourself a game.

I’d probably prefer Defender of Argus (or even Fungalmancer) in my token decks, since those effects are much more reliable. The only argument here is that if you’re going into your Turn 4 with a single minion on the board, this card is much better. But like I’ve said, it’s only the best case scenario.

Maybe, just maybe, if you play a token/board flood deck (e.g. Zoo Warlock, Aggro Paladin) and the meta is mostly Control, then you MIGHT want to play this, but that’s just about it. In your average meta, the chance to backfire is just too high.