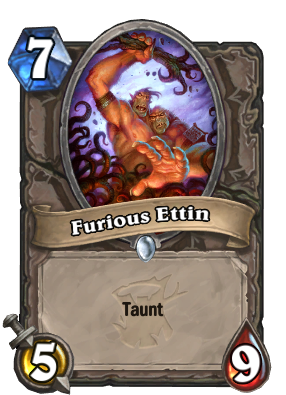 Furious Ettin is a 7 Mana Cost Common Neutral Minion card from the The Witchwood set!

One head is a morning person. The other head hates morning people.
Tweet

We have lots of mid/late game Taunts in all forms, but this one doesn’t look exciting. It’s worse than Ancient of War (technically, better if you Silence it), but Ancient of War didn’t really see any play recently. Similarly, this has the same stat total as Bog Creeper, but a slightly different distribution – 5/9 is honestly probably slightly better than a 6/8, but Bog Creeper hasn’t seen any play outside of a Concede Shaman deck that was more meme than meta.

Great Arena card, but filler in Constructed. Might see play when discovered from different cards, but that’s about it. It’s slightly better than your average pack filler, but it still looks like one.