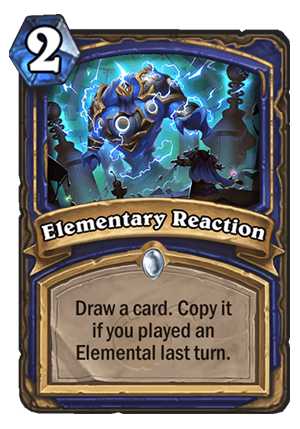 Elementary Reaction is a 2 Mana Cost Common Shaman Spell card from the The Boomsday Project set!

Draw a card. Copy it if you played an Elemental last turn.

The problem is always – is there actually a deck you’d want to play it in? Elemental Shaman is obvious answer, but the deck is non-existent and it won’t likely change. Pure Elemental deck simply doesn’t work, because it’s too fair. Most of the time, you have to play pretty slow minions on the curve, while your opponents are flooding the board, cheating mana or doing crazy combos all the time.

But it would absolutely fit into Shaman decks running a bunch of Elementals. How many of them? Well, that’s a bit hard to say. For example, Shudderwock Shaman might not run enough, with 2x Glacial Shard and Grumble, Worldshaker, that’s only 3 in total. However, maybe in a more Token-oriented deck, which runs Fire Fly, the new Thunderhead etc.? That said, in that kind of deck, Earthen Might seems better, because it also adds value, but also some on-board tempo.

Really hard to say, this card seems really good in theory, but it might be hard to actually fit somewhere. I still have to rate it highly, because let’s be honest, playing an Elemental isn’t a huge requirement in Shaman, and 2 mana Mimic Pod would be pretty nuts.