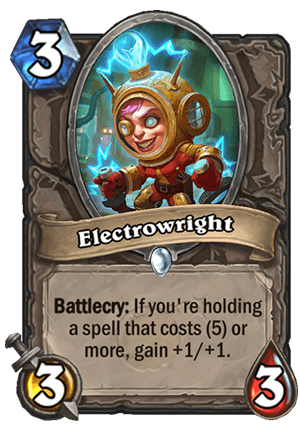 Electrowright is a 3 Mana Cost Common Neutral Minion card from the The Boomsday Project set!

In some of the decks, the condition is not that hard to meet, actually. For example, Big Spell Mage – the deck packs so many 5+ mana spells that it will activate lots of times. But even then, would a Big Spell Mage want this? I would honestly prefer Tar Creeper most of the time, you don’t really care about lots of stats in the early game, you prefer surviving, and Tar is technically a 3/5 Taunt from your opponent’s perspective. And it never fails, unlike this one. Because even in a deck like Big Spell Mage, you MIGHT end up with no 5+ mana spells on Turn 3.

But in most of the decks, even those who run lots of high cost spells, it might not be consistent enough. And even then, those decks are usually slow, and you’d prefer a 3 mana 4/4 in some sort of aggressive/tempo deck. And those don’t play enough big spells…