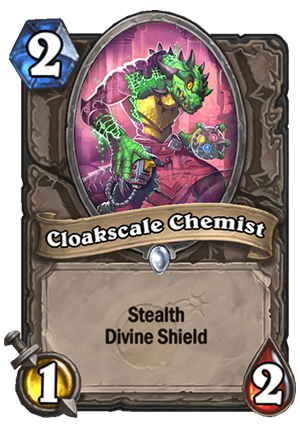 Cloakscale Chemist is a 2 Mana Cost Common Neutral Minion card from the The Boomsday Project set!

Her suit was fitted using a scale model.
Tweet

Mediocre card. If you try to pack too many keywords into a 2-drop, it’s going to be severely understatted. Stealth on this card seems a bit unnecessary – it has Divine Shield so it’s usually going to survive anyway, and it’s not like Stealthing a 1 Attack minion is going to matter. There are lots of better 2-drops to play, especially since this doesn’t have any tribe tags.

It reminds me of Silent Knight a bit. Silent Knight has actually seen a bit of play in Water Rogue, but that was only because the deck used Shadow Sensei, which could buff it on the curve. This doesn’t have this kind of synergy right now. Maybe in future, but I have no clue whether they will release synergies later down the road, so I have to rate it like it is right now – which is not the worst minion ever, but below average.

It makes sense to put into your deck only if you REALLY want it to survive on the board. Maybe you play some buffs, maybe some combo that requires a minion. But I can’t think of a deck like that right now, to be honest (2 attack is too low for Combo Priest).