On this week’s episode of my Demon Hunter soap opera, we’ll venture into the deep dark depths of abnormal builds, featuring Legend-capable budget decks and Blizzard’s very own deck recipes. What did I learn from my sanity-sapping trip to sub-2000 ranks? It certainly gave me a few ideas going forward… 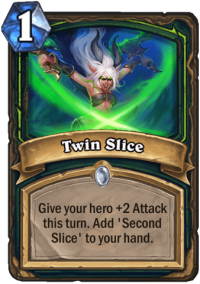 I always like it when a card nerf doesn’t render it entirely unplayable (insert Warsong Commander meme here), but the change to Twin Slice has basically turned out to be a sidegrade instead of a meaningful nerf. Instead of an early-game board control tool, it now serves as an extra source of burn in a pinch for Demon Hunters (with the same sort of impact on the board state in the mid-game as before), and it’s no wonder the card has remained a staple in all Standard decks while also catapulting the archetype to stratospheric levels in Wild.

That said, I found Firebat’s take on the class (and the meta in general) quite interesting, and it’s a thought which some other pros seem to also agree with: it’s that Demon Hunter and Warrior are fine, it’s just that basically every other class and archetype has to build highroll decks because there aren’t enough good cards to include and therefore form a streamlined gameplan. With Mage and Priest generating stupid amounts of cards every game, Rogue regularly playing at least three 0-mana discounted cards in a match and the added prevalence of Highlander builds, I’m very much in agreement. There’s no denying that Demon Hunter arrived in a busted state and it’s still arguably the best class around. I just hope the solution isn’t to butcher it so much that the meta’s fringe brouhaha decks become the new top dogs. 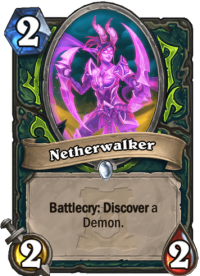 I’ve spent the first part of the week in the loving arms of Odd Demon Hunter, the deck which is now clearly head and shoulders above everything else in the Wild metagame thanks to the “nerf” we’ve previously discussed. I wish I had a witty or an insightful comment about it, but there isn’t much to add to the breakdown from Week 7: it’s really good, the hero power is busted, and now it has even more reach to play around with. Salt extraordinaire Zeddy has made it to the top 10 starting from the tutorial in just twelve hours using Corbett’s build with an eye-popping 85% overall winrate. As I said before, if you’re a degenerate like me who actually likes Tempo Demon Hunter, make sure to try it out because you’ll probably have a lot of fun with it. Warning: side effects may include miscounting early turn damage output once you return to Standard.

That said, there’s only so much time I’m willing to dedicate to Wild at the end of the day, with its much slower pace of innovation and lower relevance overall. Since my last column, the Magtheridon builds seem to have receded into irrelevance, ultimately perhaps a bit too burn-focused for the current metagame. Nevertheless, it does show further terrifying possibilities for a slower Demon Hunter build in future expansions.

So what did I spend the rest of my week, you ask? With Tempo Demon Hunter basically staying as it was (with an interesting late-breaking innovation from China I’ll discuss in a bit), I thought I’d change things up a bit and test out a few… let’s just say different Demon Hunter builds before properly returning to the grind. I’m very much aware I’m a little bit behind my 70-wins-a-week quota!

This, off course, made this the perfect time to take Blizzard’s Demon Hunter deck recipes for a spin on the Legend ladder. What happened next may shock you.

First of all, there’s the “Classic” Demon Hunter deck recipe, which is perhaps a misnomer considering how new the class is. I wish that was the biggest issue with the deck: it’s possibly the worst token build I’ve ever seen in my life, featuring heavy-hitters like Murloc Tidehunter and Flesheating Ghoul, with two random Inner Demons thrown in for good measure into a deck that otherwise tops its curve with Glaivebound Adepts. Now of course, the deck recipes are not meant to be Legend 1 material – why would you stifle innovation that way? – but this is genuinely unplayable.

Trust me when I say I died to a lot of things, in new and interesting ways I didn’t think possible as I slid further and further into the dumpster ranks. I gave up after six games, six straight losses where I never even came close to victory. It takes no GPS to figure out that the build lies somewhere between Awfulville and Uselesstown (population: 25 chicken), but it nevertheless serves as an interesting staging point for a potential future token-ish archetype, and maybe a strong signpost of Team 5’s plans for the class. My concern about any potential Token Demon Hunter build is that it has no way to leverage wide boards with buffs in a way Druid does, which means any sort of consistent early board presence would serve an aggressive approach better, much like the current tempo builds. The same, of course, holds true for the 1-mana hero power too.

The other deck recipes fared much better: first, Glaives of Fury is basically a lighter version of the current Tempo Demon Hunter builds (you know, after all the nerfs), which makes the early days of AoE seemall the more egregious from a testing perspective. There’s not much to say about it, except that even as a budget player, I’ve got something better for you a little further down in the article.

Last but certainly not least, we’ve got Team 5’s take on Big Demon Hunter, a build which is surprisingly decent even in this unoptimized form. The ability to completely shut down fellow Demon Hunters is quite valuable by itself, and there are enough threats to take the game to the distance against Priests and Warlocks too. (That said, I fell so low on the ladder by this point that I hardly encountered any Warriors, so take all this with a grain of salt.)

After my 0% winrate experience with the “Classic” deck and a 50-50 with the Glaives of Fury build, this was a pleasant surprise. I ended up going 5-3 overall, with a 3-0 record against other Demon Hunters. It’s actually a pretty fun alternative to the tempo decks and doesn’t solely rely on burn to finish the game the way last week’s Magtheridon builds did. I might spend some time with it next week just for funsies – the first order of business would be to get rid of Maiev Shadowsong and the two Fel Summoners, perhaps also cutting Flamereaper so I can make some space for the two copies of Warglaives of Azzinoth.

This wasn’t all I played with last week: if you’re looking for actual good variations on Tempo Demon Hunter, now’s your time.

…is Another Man’s Treasure

Say what you will about Demon Hunter in general, but its strengths are a blessing to new and F2P players, making it easy to put together a viable competitive deck on the cheap in the current metagame. Fellow HearthstoneTopDecks writer Old_Guardian has recently reached Legend with the build featured below, and though I’m confident in saying that Metamorphosis is the safest craft in the game’s history, his success goes to show how strong the archetype’s early game still is, even in a diminished form.

The introduction of Amani Berserker is not just a budget trick: recently, a Chinese player known as MrLiu has won a large open tournament with a build featuring two copies of it – which seems necessary if you want to run Guardian Augmerchant as you otherwise lack relevant targets for its effect –, an idea which also caught the attention of the good people over at ViciousSyndicate.

Though the single copy of Twin Slice and the removal of Altruis the Outcast certainly seem controversial, especially for laddering purposes, this deck is definitely worth a try. It’s not a massive archetypal change but certainly goes a long way in re-establishing the early game board presence Illidan has lost after all the different nerfs.

I think Amani Berserker will become a core inclusion in the deck – and I’ll make a bold prediction and say that I’ll find a top 500-worthy version of the Big Demon archetype. (Cue sub-5k finish for the month.)

No, I won’t put in Questing Adventurer.