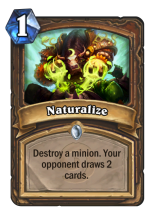 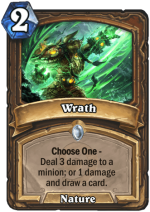 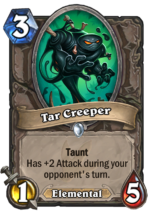 I usually aim to mulligan for Wild Growth in general, but having a Naturalize in my starting hand is also very handy; it's just so flexible. Obviously, most commonly used to trigger Hadronox, the Cube version of the Taunt Druid decks have more flexibility when it comes to triggering the Deathrattle. Against Warlock, this card can also mill a few cards off his deck.

If I have Wild Growth in my hand, I can also recommend keeping a Nourish, if available. Your ramp will be monstrous, or you can safely bank on draw. 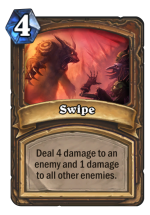 As per the general Mulligan, keep Wild Growth and Tar Creeper. Tar Creeper is still the best defensive tool against Aggro, while keeping Wrath gives you flexibility for draw and/or hard removal. Swipe might be a weird choice, but it works amazing against most prominent decks out there - Odd and Even Paladin.

Aggro is about survival, and Taunt Druid does a great job at doing so. If you happen to find one, Oaken Summons is also a great keep against Aggro. 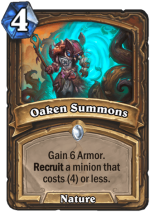 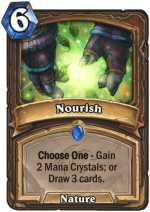 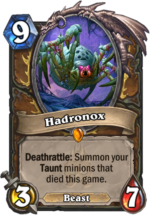 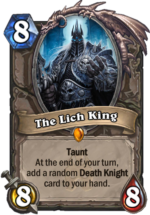 Against Control, I'm still fishing for the best Mulligan options. Wild Growth and Nourish are no-brainers for me, especially when found in the same hand. As for late game, Lich King offers tremendous value. Keeping Hadronox might go south, if you don't get your Taunts out, but since it's one of your main win conditions in late game, I rarely toss it aside when I mulligan for it.

My first ever guide/deck, be gentle!

With the arrival of The Witchwood expansion, Hearthstone’s taunt mechanism has made a prevalent impression. Decks such as Odd/Quest Warrior have returned, but Cube Warlock, heavily reliant on the same tactic, is also not going anywhere. When combo’d with all-time favorite and already Hall of Fame-candidate Carnivorous Cube, Taunt is more alive than it ever was. This mechanism, and the birth of Druid’s arguably strongest new card Witching Hour, has spawned a new menace, Cube Taunt Druid. I am a Control-deck player myself, and since I wanted a little bit more of that, I created this spin-off.

I believe Taunt decks have been prevaling because of an outcry in the Control-community. The last few expansions did nothing to hurt Aggro-archetypes. On the contrary even, as Paladin received Call to Arms in the K&C expansion. Both Cubelock and Quest Warrior now rose to the job of countering those specific Aggro decks, most commonly Odd Paladin and Odd Face Hunter, but also Odd Rogue and Even Paladin.

Your gameplan is simple: force control over the board by slapping down Taunt minions, and duplicating those with the all-eating Cube where necessary. Your late game will consist of reviving your late Taunt minions with a combo of Naturalize and Hadronox, your main win condition. Even better; can you just imagine what cubing a Hadronox does? Yes. Disgusting. 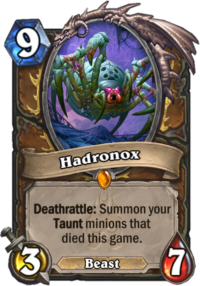 The deck offers ways to cheat out minions with Master Oakheart, but this step should not be taking lightly. Since Hadronox is one of the two two 3-attack minions in your deck, that card has a high chance of being summoned. However, leaving it open, without using a destruction card like Naturalize, opens it up to Silence. If not killed straight away, it can still be cubed, but you will lose your first Taunt-summoning. So, think carefully about your steps. This deck, if played correctly, can have an endless supply of Taunt minions, wearing your opponent down, or generating immense value if you lost and revived your The Lich King. And if that cheat is not enough, there’s always Witching Hour, which can be used to bring back the only Beast in this deck – Hadronox.

Spiritsinger Umbra and Mossy Horror are included because it gives me a more controlly feel to the deck, which I prefer. You can easily change these out for substitutions, but I had this happen to me: I had a Lich King on my side of the board that my opponent couldn’t handle with yet. Next turn, I put down my Umbra, and cubed the Lich King, which gave me 2 Lich Kings. I then immediately Naturalized the Cube, giving me 4 Lich Kings in total. The possibilities with Umbra are endless, especially if I’d later cube my Hadronox with Umbra still on the board.

In short, this deck is fun and does a good job out-valuating other Control decks, and stopping Aggro decks in their tracks.

I will split the mulligan section into two sections, providing some more context below each section. The sections will be focused on Aggro, and Control.

Keep only if certain conditions are met:

Ramping for Druid is very important, but can be tricky against Aggro. Wild Growth is always a must keep, provided you have a Taunt Minion in your hand. Swipe may feel like a weird choice, but I’ve often had it safe my skin from a crowded Odd/Even Paladin board.

Keep only if certain conditions are met:

In all honesty, I did not have any issues with Control Decks, Mind Blast Priest being the exception. The value this deck creates, and the slower pace of Control matchups, often put you on the winning side. Your resources end-game are ridiculous, and mulligan will rarely be your downfall.

(You could potentially out-value Quest Rogue, but it requires the perfect ramp and the perfect card-draw sequence.)