Our Face Hunter deck list guide for the Scholomance Academy expansion features one of the top lists for this archetype. This Hunter guide includes Mulligan Strategy, Gameplay Tips, Card Substitutions, and Combos/Synergies! 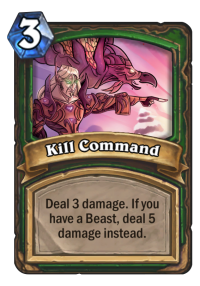 Face Hunter is one of the oldest aggro decks in Hearthstone history, with a simple gameplan: leverage early tempo on the board so that you can use Steady Shot the way it was always intended to be – the instrument of brutal, cold-blooded murder. Turns out, a constant source of two damage per turn on tap is a pretty effective way to close out games, and Classic staples like Eaglehorn Bow and Kill Command (which we’re contractually required to refer to as Skill Command if it’s topdecked for lethal) has kept the archetype competitive for many years, and even though the SMOrc enthusiasts had a tough time making it work in recent expansions, it’s back with a vengeance in Scholomance Academy after a few rounds of nerfs that made the rest of the field just weak enough to be susceptible to the ancient art of going face and me no trading.

This is one of the best decks for Face Hunter in Scholomance Academy, one which reached early #1 Legend in September. The deck list might still get changed or refined – if it happens, we’ll update it here!

Find more versions of this deck type on our Face Hunter archetype page! 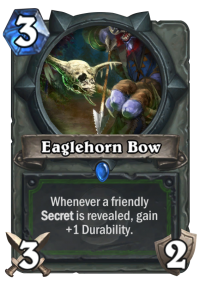 The key part of aggro mirrors in card games is to identify who’s the beatdown – meaning which deck is faster at executing its burn plan. If you are even slightly slower than your opponent on average, it means it’s a mistake to try and race them. Instead, you need to adapt a control deck-like approach, clearing the board and keeping them away from your face as you slowly turn the tide and burn them down once you’ve secured your own safety.

Past iterations of Face Hunter were firmly rooted to the edge of this spectrum, so much so that many matches were played where literally every minion and weapon attack went directly to the opponent’s face, regardless of how the board state may look after they make the favorable trades. That is no longer a viable approach with this kind of a build as it relies a bit too much on synergies and repetitive minion damage to reach its goal. With only the two copies of Eaglehorn Bow and Kill Command as your guaranteed source of damage, you need to do some serious legwork if you want to ensure that you get there once you’re out of cards and losing the board.

The key here is Dwarven Sharpshooter as it allows you to use your Hero Power to help achieve early board control, setting up a bit of card advantage in the process. The plethora of flexible but fragile 1-cost cards in this Face Hunter build means that you absolutely want to stick something to the board early on: neither Adorable Infestation nor Demon Companion are particularly exciting on a completely empty board. 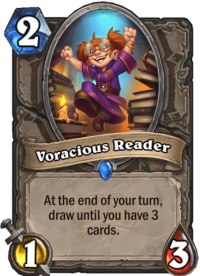 That said, there is no such thing as a “long game” with Face Hunter, and even if you’ve managed to ensure board parity or a tempo advantage by turn four, you need to start thinking about closing out the game. At this stage, the difference between having Voracious Reader available to you or not is enormous. You don’t need to get too greedy with the card: a 2 mana 1/3 which draws you another card and has to be immediately killed by your opponent is often good enough to win the game, and certainly much better than floating two mana for a potential extra card one or two turns down the line. If you know you’re going to completely run out of cards soon, you need to do a quick mental calculation. How many turns will it take to burn down my opponent using Steady Shot every single turn, and will they be able to kill me faster than that? If you can’t see a clear way for them to race you, push your chips to the middle and go all-in with your face attacks. If they make the trades for you, good. If not, and your math was right, you can still beat them out in the race. With Voracious Reader redraws, you can afford to contest the board for a few turns more, but you can’t go on with that forever. Mages will eventually throw down Jandice Barov or a cheapo Mana Giant. Paladins will play Libram of Hope. Rogues will outdraw you with Secret Passage. You’re still playing one of the most aggressive decks in the game, but you need the early minion damage to get there.

As for the mirror, the old Hunter adage still applies: for God’s sake, don’t go second! Starting with a baked-in tempo disadvantage against an identical deck means you’ll be fighting from behind the whole game. The best you can do with a bad situation is to try and overpower them on the board and present enough repetitive damage to force them to trade instead of racing you. It’s about as unlikely to work out as it sounds. 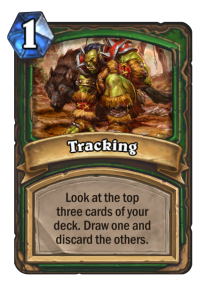 The equation changes somewhat when you’re up against a significantly slower deck. Let’s be real here: your minions are not going to attack more than once. Don’t make trades hoping to recoup the damage two turns down the line. Trust me, your opponent will take care of the matter for you. Just focus on lowering that health total. Make sure you float as little mana as possible and to press the Steady Shot button almost every time. A consistent trickle of must-kill minions coupled with the constant bee stings of your hero power is the perfect balance to strike.

You will still need to math out the game to identify your window of opportunity. Eventually, they will find the taunts and the heals to lock you out. How many turns do you have until then? How can you line up the necessary damage? Sometimes, you will have to rely on the topdeck because the ~30% chance to draw the lethal damage on the next turn is higher than what you would get by fighting on for two or three more draws. Speaking of which, if you’re completely off the board and can reasonably expect your opponent to clear whatever you may play, you might want to consider holding on the last Beast in your hand so that you can deal five damage instead of three with Kill Command if you topdeck it. There’s a reason we call that card Skill Command, you know! Little things like this go a long way with your eventual winrate.

Try to get extra Eaglehorn Bow charges by setting up Secret triggers before you would use up its last attack. Any sort of extra damage you can squeeze out of your hand and deck can make the difference between a close victory and a defeat.

Unlike the Face Hunter builds of the past which purely relied on burn and therefore utilized cards like Wolfrider to pack as large a punch as possible, this iteration of the archetype is a bit more synergy-based, using cards like Scavenger's Ingenuity and Tour Guide to cheat stats (or mana, depending on your outlook) onto the board. Since Phase Stalker is such a good card and Secrets work well with Eaglehorn Bow, the real question is their composition rather than whether or not to include them in the first place. The featured lists opts for one of the three most popular ones (Explosive Trap, Freezing Trap and Pressure Plate), ensuring that they are always playable from hand and via Phase Stalker’s effect without any overlap. Depending on the metagame, a second Freezing Trap instead of the Explosive can work well – for instance, Druids become a lot easier to deal with if you can rely more on that kind of redundancy. Pack Tactics is also a viable option if you’re facing a lot of aggressive opponents who try to contest the board with minions, though it’s less common than the other three Secrets. In that case, one copy of Unleash the Hounds can also be a worthwhile inclusion. 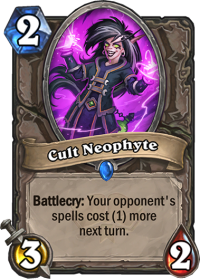 Though the two copies of Cult Neophyte (which some builds run) can be very effective in disrupting key AoE spells or big Mage comeback turns (not to mention Druid ramp plays), it’s not strictly necessary to enact your gameplan. Toxic Reinforcements is a delayed burn spell which will force you to weave in Steady Shots even earlier and with a greater consistency, albeit at the cost of a less reliable board presence and more comeback opportunities for your opponents – this is mostly a preference in playstyle. High risk, high reward, Hunter style. The choice between Tracking and Animal Companion is a very similar one. Alternatively, Imprisoned Felmaw is also an option, though it can be quite finicky from a tempo perspective and perhaps you have better options out there.

A spicy option is Lorekeeper Polkelt, popularized by Kranich – tossing in what is essentially a Chillwind Yeti in a garb is not that big a sacrifice considering it will guarantee a Dragonbane topdeck followed by either Eaglehorn Bow or Kill Command, ensuring that you can finish off your burn-based gameplan in the next few turns. This build cuts the two Cult Neophytes to make space for this legendary alongside Pack Tactics as a fourth Secret in the deck.